May 3, 2019 marks the 550th anniversary of Niccolò Machiavelli’s birth. Often referred to as “Old Nick” because of his ambiguous political teachings, Machiavelli was among the protagonists of a particularly troubled period in Florentine history and a very influential voice beyond that context, too. Machiavelli’s innovative approach to a wide variety of crucial topics had an immense impact on Western culture. Still today, his texts are studied across a wide range of disciplines: history, philosophy, literature, law, political science, economy, and marketing. Not surprisingly, his works (ranging from political and military theory to poetry and theater) have been translated into most languages, making him one of the best-known Italians in the world alongside Dante, Leonardo, Michelangelo, and Galileo. 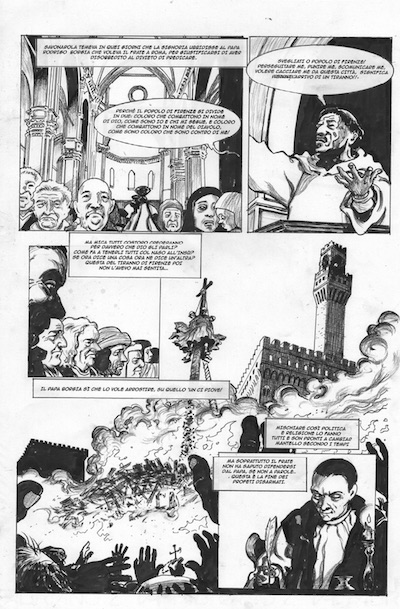 With their “Vita di Niccolò Machiavelli Fiorentino” (published by Minerva Edizioni), ISI Florence history professor Simone Testa and comics artist Marco De Luca connect this famous historic figure’s private life to his cultural and political projects. To popularize knowledge of Machiavelli’s epistolary exchanges, sense of humor, social life, and extra-marriage love affairs (all of which are tightly interwoven with his activity as a writer), Testa and De Luca rely both on up-to-date academic research and the emerging genre of the graphic novel.

Their at once entertaining and informative comic strip will be launched on May 3 at the prestigious Hotel Bernini, just next to the same Palazzo Vecchio where Machiavelli so passionately served the Florentine Republic for fifteen years as Secretary of the Second Chancellery.