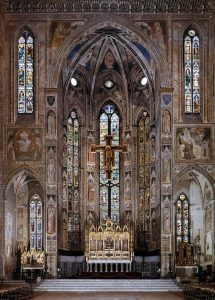 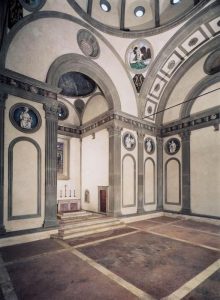 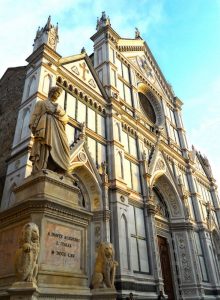 Here in Florence, we are lucky to have such a wealth of history and culture surrounding us. In fact, it’s not everyday that you can find one of the world’s largest gothic churches in your school’s backyard.
This past Thursday, our Social Media class ventured out of the classroom and into the Church of Santa Croce. The basilica was founded in 1295, almost six centuries before our home universities were established! Only a five-minute walk from Palazzo Bargagli (one of the Institute’s buildings), we were ready to explore. The outward appearance of Santa Croce is relatively deceiving. While the outside structure is large and beautiful, it doesn’t give an impression of the building’s actual depth. After moving through the small entrance and into the church, we found ourselves in awe. The basilica’s interior is dauntingly large, with unique soaring wood ceilings. There are nearly twenty altars lining the walls, each decorated with family crests and incredible artwork. Perhaps the most impressive figure that has come to rest in Santa Croce is Michelangelo. We wandered around, taking in the features that make Santa Croce so famous. From the floor tombs (a phenomenon that is specific to European gothic churches and a novelty to American tourists) to the private vestibules, our experience was saturated with history. Just when we thought we had seen it all, we stepped outside and found Arnolfo’s cloister, only to witness more exquisite architecture. Our group left Santa Croce feeling accomplished because of all our new historical knowledge, and we felt more in love with this city that we get to call home!