Professor Rita Comanducci teaches the Art of Florence: Exploring Visual Culture class here at ISI and in her private time she is a lute-enthusiast. She shared with us her experience with the European Lute Orchestra and the following article written by The Lute Society. 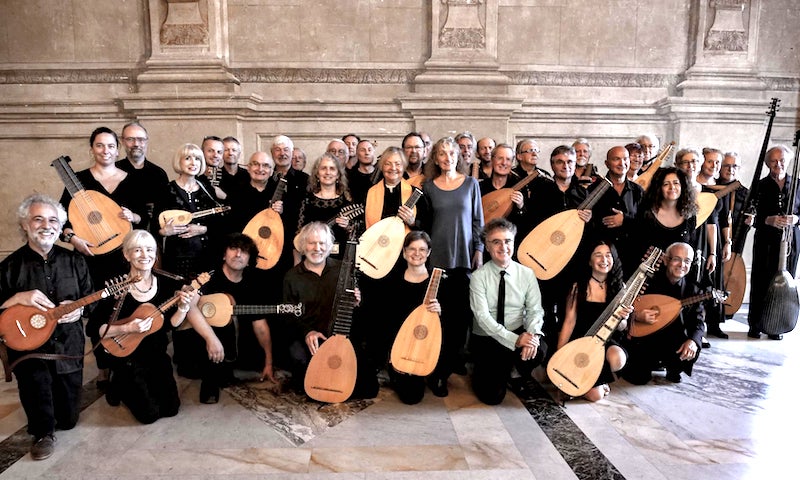 All roads lead to Rome, the saying goes, and this was where the European Lute Orchestra found itself for its ninth concert. The Eternal City, the home of Christianity and Western civilization, where lovers of history and beauty can spend a thousand lifetimes without tiring, must amaze the tourist and overwhelm the photographer with its inexhaustible wonders; yet surely we can say that we added just one more tiny tessera to the vast and endless mosaic of its cultural life.

The rehearsals took place in the upstairs offices of an insurance company, which did not sound very promising, but this is Rome, and so the walls and shelves were full of beautiful ancient marble carvings excavated from under the site of the building, to make a fascinating archaeological display. Some of them depicted musicians, which gave a humbling sense of perspective to the music-making.

The concert itself was held in a vast hall, which in fact dwarfed even our substantial ensemble; the Sala Regia in Palazzo Venezia, right in the center of the city, facing the Altar to the Nation on the Capitoline hill. Despite one or two worries about publicity, we had a good audience on the night. Incidentally, this Palazzo, which used to be the Venetian embassy in Rome before unification, houses an art gallery, with one or two nice paintings of lutes, and a rather remarkable collection of Meissen figurines, including some raffish little musicians with guitars.

Rome wasn’t built in a day, and neither was our European Lute Orchestra; every year players get a little better at watching the conductor and playing in time! This was probably the best concert yet, which you can see and hear in Joyce Reeve’s videos on the ELO Facebook page. Scroll down to hear a French Suite (Pavane, Passemezzo, Bouree, Bransles de Village), a German Suite arranged from Praetorius (Ballet, Pavane de Spagne, Volta), and some rehearsal recordings by Lisa Nocentini.