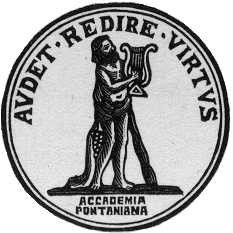 “The Accademia Pontaniana: A Model of a Humanist Network” by Prof. Shulamit Furstenberg Levi (ISI Florence) is an exploration of the vast intellectual networks that centered around Giovanni Pontano (c. 1426-1503). It includes his academy’s densely knit network in Naples as well as the loosely knit networks that developed between members of the “Accademia Pontaniana” and other humanistic academies in the rest of Italy. In particular, Prof. Furstenberg Levi points out the links between the “Accademia Pontaniana” and other sodalities in southern Italy. Also, she highlights the lineage between fifteenth-century informal academies and sixteenth-century institutional academies. To do so, she applies recent sociological theories to the practices and rituals connecting Renaissance humanists.